I'd like to welcome author Elyzabeth M. Valey to my blog today,  Let's find out more about her book "Blind Beauty." 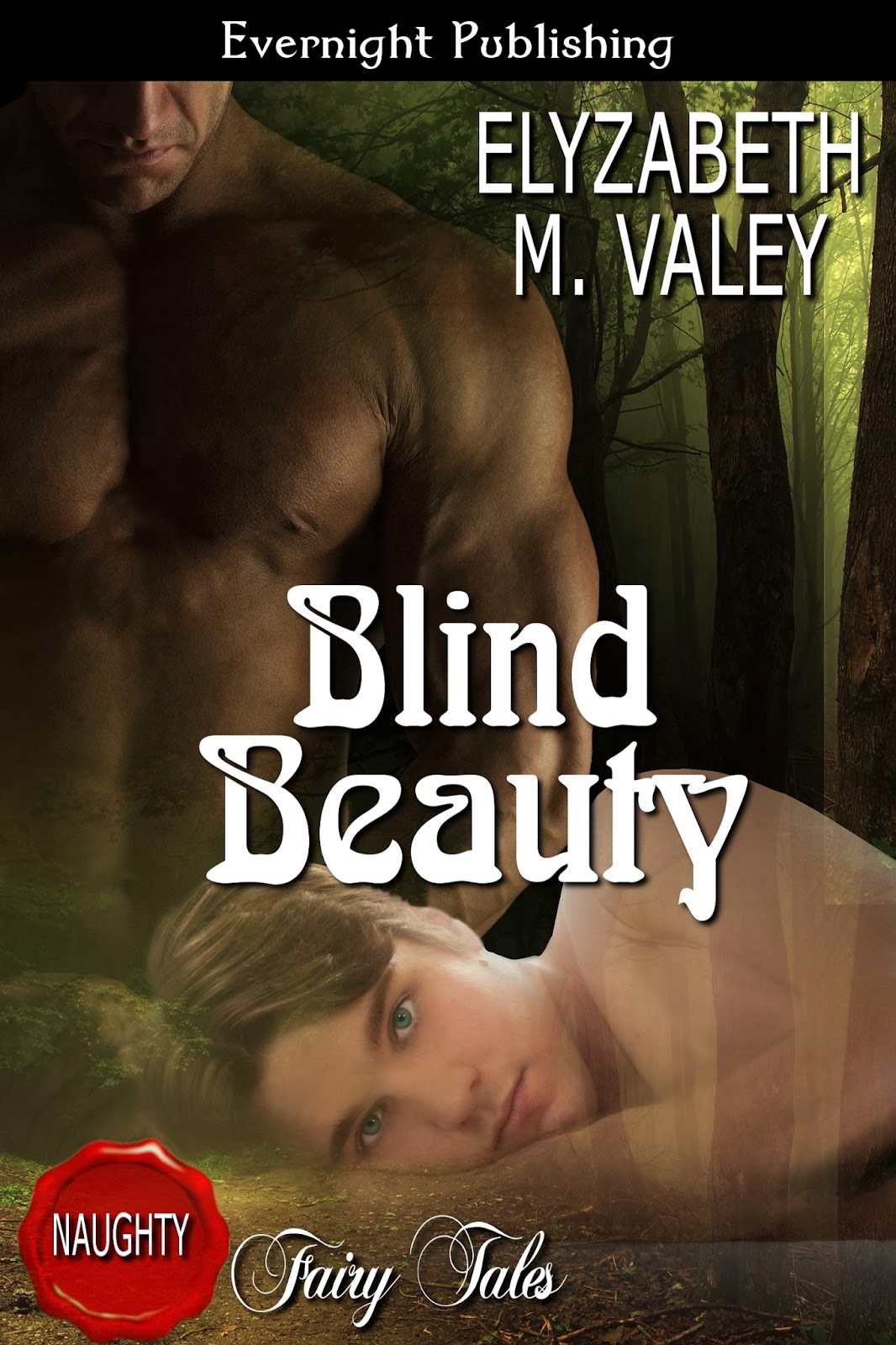 Blind Beauty (Witches’ Mischief Series 2) Promo Packet 4
Thank you for having me!
Hello everyone! I’m here today with two guests that play an important part in Blind Beauty: Deidre and Mortimer Brandywine. I tried to reach the protagonists, James and Richard, but both men seem to be occupied at more pleasurable activities and have not answered my notes.
Fortunately, Morti, who’s Richard’s step-brother and his lovely wife have offered to answer some questions regarding the men.
Welcome and thank you for doing this Deidre and Morti.
“You’re welcome.”
You both know Richard, as he’s your step-brother, Morti, but, please tell us, how did you meet James?
M: We found him wandering near our home during a snowstorm. He was going around in circles with his horse. Deidre noticed him first.
Deirde nods enthusiastically.
D: “Yes, it was impossible not to notice. The lad was wearing a great coat but there was something about him… exotic. Don’t you think Morti?”
The couple shares a knowing glance and Deidre’s cheeks flush profusely.
Ahem, so I take it you invited him inside and then what happened?
M: “That’s kind of private.”
D: “We warmed him up.”
Deidre bursts out laughing and I raise my eyebrows in question. Morti clears his throat loudly and shifts in his seat.
Why was he lost in the forest? I ask, quickly changing topics.
M: “Ah, he was on his way to his new home. He’s bought a house in the outskirts of the forest. He,” Morti pauses. “He had trouble with his family back home.”
What sort of trouble?
M: “Well, it seems he was called some things--”
“They called him ugly!” Deidre jumps in, gesticulating wildly. “Can you imagine? James Macintosh ugly?”
He’s not?
The couple glare at me.
D: “Of course, not. He’s the sweetest looking thing you’ll ever set eyes on. His hair is spun gold, his eyes blue as a midsummer sky, his lips plump and sweet as honey, and he’s hard in all the right places.” Deidre chuckles and winks.
M: “He’s definitely something special,” Morti agrees. “He’s very enthusiastic.”
The glimpse of a smile appears on Morti’s face, and he seems distant for an instant, as if remembering something pleasant.
You’re happy that he’s with your brother?
M: “Happy? We’re very happy. We’re so excited for them. Even if society frowns upon that sort of thing in this day and age, everyone should be free to love whomever they please.”
Deidre nods. I notice her squeeze her husband’s hand.
So, tell me about your brother, Richard, what’s he like?
D: “Oh, Richard is such a looker,” Deidre sighs dreamily. Catching her husband’s disapproving glare, she straightens her posture and gives me a nervous smile. “Of course, Morti is the handsomer of the two, but Richard is quite the looker. He’s a carpenter, you know? So he’s spent a lot of time cutting down trees and carving them and making beautiful things out of them.”
How about his character?
Morti frowns. “Richard has a nose for trouble. Always has, and well, the things he and James have had to go through just goes to show. Richard wouldn’t have ended with those thieves if he—“
D: “Morti, don’t start with that again.”
M: “All right, all right. Richard is a good man, a very good man. If he sees someone in need he’ll go out of his way to help, but sometimes, precisely because of this, he can be a bit naïve and get into a load of trouble.”
D: “It’s true. That thing in the village—“ Deidre drops her gaze. “At least, everything got sorted.”
M: “Yes, yes, it did.” Morti smiled at Deidre. “Do you need anything else, Elyzabeth?”
“No, that’ll be all. Thank you Morti and Deidre.”
M: “Thank you. I hope everyone enjoys learning James and Richard’s story. They deserve happiness.”
Blurb:
James Macintosh is hours away from his new home. He is ready to start a secluded life away from all the rumors, insults and disgusted faces concerning his appearance. However, a meeting with a mysterious woman and her child, mingled with a sudden harsh snowstorm will set him down a very different path than the one he had originally envisioned.
Richard Randywine is an accidental fugitive living with a band of rowdy thieves. A good man at heart, he has gotten used to hiding his emotions behind his strapping muscles and brute strength.  Yet, when the thieves ambush an unsuspecting rider, Richard is forced to drop his mask and step forward.
Will both men be able to see what lies before them or will they be blind to the possibility of happiness?
Available at:
Evernight Publishing
Amazon.com
Amazon.uk
Bookstrand
All Romance Ebooks
Add it to your Goodreads 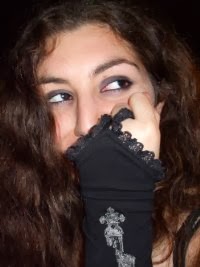 Author Bio:
Defined as weird since she was about eight, Elyzabeth honors the title by making up songs about her chores, doodling stars and flowers on any blank sheet of paper and talking to her dog whenever he feigns interest.
Losing the battle to the voices in her head is her favorite pastime after annoying her younger sister with her singing. Writing stories full of passion and emotion where love conquers all is her happy pill and she'll forgo sleep to make her readers live the dream.
Stalk me at:
Blog
Website
Facebook
Twitter
Goodreads
Pinterest (Blind Beauty has its own board! Check it out here)

He climbed atop his horse, as told. His back molded to Richard’s, his body betraying him as it molded into the other man’s embrace. Richard pulled him hard against him, his body enveloping him in an almost suffocating hug.
“Go,” he whispered huskily into his ear, his breath fanning it. James pressed his thighs against Faith’s flanks, hoping the animal would understand, considering the strange position she was in. She did, for she set off at a trot in the direction Richard indicated. They galloped in silence, trees whirring past them, snow flying when they swept past. James eyes widened and he barely controlled the urge to order Faith to stop as he realized their impasse.
“Richard, the hoof prints, the snow.” James pointed at the visible trail. “They’ll track us down as easily as the king’s hounds trace a fox.”
Richard’s breath was warm in his ear. His hair tickled his temple and James had to suppress a shiver.
“I know.” Richard chuckled. “Don’t worry. I have a plan, besides wishing that they’ll wake up during the night and we’ll be miles away by then or that it snows heavily again.”
James wished he didn’t have to worry, but he couldn’t relax. The problem wasn’t so much the thieves that could pursue them at any moment, but the man behind him. He was too close, too comforting, and all too desirable. James shifted in his seat again, trying to find a comfortable position. One in which he wasn’t pressed up tightly against Richard’s groin. One in which he didn’t imagine he felt the length of his cock hard against him. Because, he was convinced it was his imagination. Otherwise, how could a man like Richard be interested in him? It didn’t make any sense. In his experience, men like Richard were ladies’ men. They seduced, fucked and discarded women. He wasn’t a woman and he’d been rejected too many times in his life. He didn’t need this. He didn’t need more pain. Richard’s fingers brushed against his side, the fingers digging into his flesh and distracting him as arousal flared in every centimeter of his flesh.
“What got you into thievery?” he asked, attempting to forget how close their bodies were.
Richard grunted in reply and he fell silent once more, fishing his mind for a topic of conversation. It came up blank. He thought about asking Richard to stop. Faith was probably tiring though she didn’t show it and surely, they were safe by now. He should ask. James knew he should, but he couldn’t. He was losing his mind, falling prey to the liquid fire that was consuming him inside and outside. He wasn’t sure if the man was hard, but he was. His cock was stiff and throbbing, the idea of taking or being taken by Richard flashing through his mind every time Faith bounced.
What would it feel like?
Flesh both silky and hard as steel brushing against him, an intimate caress, deep and longing. They’d become one man, writhing, gasping, and moaning. James’ breath hitched, the tightness in his breeches becoming uncomfortable. He clenched his teeth together and grasped the reins so tightly the material cut into his hands. He scrambled to regain his bearings, to remember whom he was with and what had occurred in the last 48 hours. He couldn’t trust Richard, but neither could he trust his treacherous body. He was not a beautiful man. Surely the thief didn’t want him. The thief. That’s right, Richard was a thief. He had no morals, no scruples, no—James groaned as Faith skipped over a fallen log, throwing Richard’s body against him, the erection he was sure he was imagining grinding against his bottom.