I'd like to welcome author Jean Hart Stewart to my blog today.  Let's find out more about her and her book "Fearless Pursuit"


1-How long have you been writing?

I've always written in my head, but have been tackling it professionally for about twenty years. I've been published fourteen years of that time, and am on my thirty-fourth book

My favorite genre is historical, specifically the regency period, but I've published mostly in historical romance. Have lately branched into erotica, with the urging of my editor at Ellora's Cave, and that's a whole new genre. Fun, though

I'm working on the eighth book in my Passionate Pursuit series. We start with the grandparents in 1898 and follow the children and grandchildren.  All sexy  (very sexy!) pointed-eared elves. This one is called Defiant Pursuit.

When I begin a story I begin with the character, at least in this series, since the family structure is already in place.

Fearless Pursuit is the fifth in the elf series. As a series progresses, it's a challenge to even keep the characters straight. Rurik is the grandson of Lars, the elf who started the series with his adventure is 1898 and rescuing his love from a slave market in Constantinople. Rurik is just as big a hunk, and his love for Reina must overcome even more obstacles than usual, including a vicious murderer who will do anything to get his hands on Reina. And two adorable children involve all the elves in solving the mystery of their parenthood. It's tear-jerker in places as well as a hot love story. 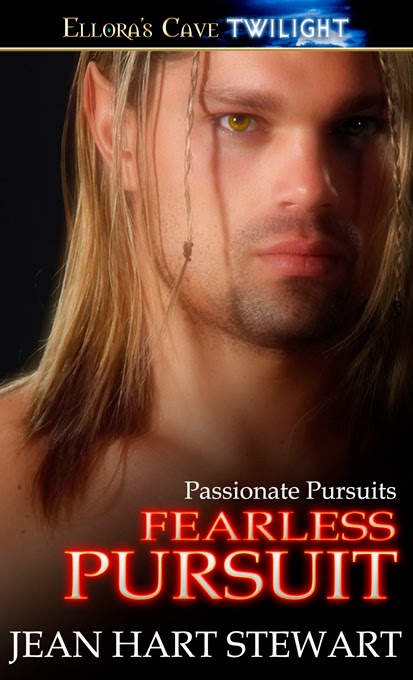 Two brothers, both sexy, pointed ear elves, strive to find their destiny. Losing their hearts to two children in their father’s clinic complicates matters. Rurik must fight his way to secure his love, the beautiful singer, Reina, against a sadistic villain intent on seizing both her and boy, Tommy.  Jake is heartbroken when both Tommy and the girl Beth find and return to their rightful heritage.

Rurik will endure anything to have Reina. Jake cannot face being an elf if it means losing those he loves. Rurik craves lasting love. Jake wants to know himself and understand his destiny.

Let these elves warm your passions and your heart.

He shifted her so his stone-hard cock was nudging her cunt as he lifted one hand to her pouted breasts.
“Oh lord of all the elves. Let me slow down here a little, love. I’d liable to plunge into you like a maniac.”
She smiled and tweaked the hairs on his chest.
“And what’s wrong with that? I want you, Rurik. Now. I’ve wanted you for a long time.”
He really didn’t need any encouragement. While he appreciated her wonderful words, she was about to send him over the edge without his even entering her.
He flipped them both over so he was on top and began to caress her breasts. Knowing he had little time before he came he switched to holding his stiff prick against her mound and rotating it. Parting her already wet folds for better access he massaged her clit, as tenderly and yet as firmly as he could manage.
He shut his eyes tightly and stilled. He was going much too fast for an inexperienced girl. She didn’t seem to agree as she swiveled her hips and tried to draw him closer. When she moaned and clutched him he gave up the useless fight for restraint. He plunged into her trembling body over and over again, holding onto his control until he thought he’d die of the effort.
He held back the power of his strokes as much as he could, although he still feared he was pounding into her with no finesse. She’s a virgin, he repeated to himself over and over. This is her first time. You must be patient or you’ll lose her. He was dripping sweat when he felt her vagina clutch him tightly as she sailed into her first orgasm with a small scream.
As her hot cunt clenched his cock he surrendered completely, driving into her with one more powerful plunge and smothering his orgasmic shout in her hair.
He lay on her, sprawled in utter content, until he remembered the difference in their weight. Rolling over, still embedded in her body, he kissed her nose.
“I hope I haven’t completely crushed you, my love. I got a little carried away there.”
“And I didn’t?”
Her smile blazed at him.
She had the sated look of a woman well-content with her sexual partner.
He didn’t withdraw, and predictably his cock started to swell again. He doubted if he’d ever get enough of his enchanting Reina.