This is a first, I'm honored to have not one but TWO authors on my blog today.  I'd like to welcome M.A. Church and Julie Lynn Hayes.   Let's find out more about this intriguing book  "Be My Alien."


What’s an alien to do? Dumped at the Empire State Building by the very male he’s been trying to get a date with forever, Taz is stranded on a backwater planet called Earth with no money, no idea where the motel they rented is located, and… he’s starving to boot! The lovely moonlit skies he had admired no longer holds any appeal for him.
Where can he go, what can he do? The answer comes in a form of a human named Reed… and a love that will travel across the universe.

Hey guys! Be My Alien is scheduled to be released by Dreamspinner in May/June. This is the first book in a series of novel length books written by Julie Lynn Hayes and me. When we have a releases date we’ll be sure to let you guys know. J 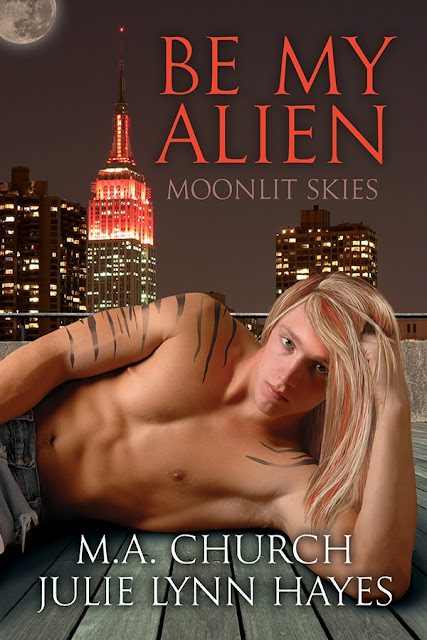 A man too busy for love…

Reed owns an upscale men’s boutique with a naughty back room. While making a late delivery to a client, he runs into Taz.

A man on a disastrous date…

When Taz agreed to come to Earth on a date, he didn’t expect to be dumped and left with no way home. Then he falls into Reed’s arms—literally.

A coffee date soon becomes a trip back to Reed’s apartment. But when Taz’s stripes begin to show, Reed discovers Taz comes from a planet far, far away.

Reed never believed aliens existed, but he’s facing one now. What in the world is he going to do?

Excerpt:
“Are you okay? Hello?”
Reed dragged his mind away from those sexy green eyes. “Ah, huh? What?”
“I’m sorry. I didn’t mean to fall on top of you like that. You see, it was like this. I was pushed, and you just happened to be there and….” The stranger grinned at Reed. “And down we went.”
Reed shifted under the body lying so contentedly on top of him. Hell’s bells, the guy fit against him perfectly. From the feel of things, they were both close to the same height. Which also meant certain things were… aligned. “Oh yeah, I’m okay. Banged my head a little, but I’m fine.”
The stranger bit his bottom lip, his teeth worrying the tender skin. Reed debated slamming his head against the floor a few more times in the hopes of rattling his brain back to normal as the stranger rolled off him.
“I really am sorry.”
“No harm done.” Reed sat up and looked at the guy once again. Well, not much harm, anyway. His libido just had to pick now to perk up, didn’t it? But damn, this guy was sexy. Reed struggled to his feet and held his hand out to the man still on the floor, looking up at him. The guy took his hand and let Reed pull him up. “Name’s Reed. Are you okay?”
“Hi, Reed!” The guy hopped to his feet in a single, lithe movement, as if it was the most….world. “My name is Taz. Nice to meet you, and yes, I am.”
For a moment there was a flash in the guy’s eyes that belied his statement. “Good, that’s good. Glad to hear it. Well, I guess I’d better be going—”
A forlorn expression crossed Taz’s face and his pretty eyes clouded. “Oh.”
Reed hesitated. There was something about the guy that pulled at him. When was the last time he’d felt that pull? Way too long ago. Taz was cute, sure. But there was this look of hurt. Dammit, Taz just looked so lost. Insane as it was, he wanted to make it all better.

Author bio:
M.A. Church
M.A. Church lives in the southern United States and spent many years in the elementary education sector. She is married to her high school sweetheart and they have two children. Her hobbies are gardening, walking, attending flea markets, watching professional football, racing, and spending time with her family on the lake.
But her most beloved hobby is reading. From an early age, she can remember hunting for books at the library. Later nonhuman and science fiction genres captured her attention and drew her into the worlds the authors had created. But always at the back of her mind was the thought that one day, when the kids were older and she had more time, she would write a book.
By sheer chance she stumbled across a gay male romance story on the web and was hooked. A new world opened up and she fell in love. Thus the journey started. When not writing or researching, she enjoys reading the latest erotic and mainstream romance novels.

Author Bio:
Julie Lynn Hayes was reading at the age of two and writing by the age of nine and always wanted to be a writer when she grew up. Two marriages, five children, and more than forty years later, that is still her dream. She blames her younger daughters for introducing her to yaoi and the world of M/M love, a world which has captured her imagination and her heart and fueled her writing in ways she'd never dreamed of before. She especially loves stories of two men finding true love and happiness in one another's arms and is a great believer in the happily ever after. She lives in St. Louis with her daughter Sarah and two cats, loves books and movies, and hopes to be a world traveler some day. She enjoys crafts, such as crocheting and cross stitch, knitting and needlepoint and loves to cook. While working a temporary day job, she continues to write her books and stories and reviews, which she posts in various places on the internet. Her family thinks she is a bit off, but she doesn't mind. Marching to the beat of one's own drummer is a good thing, after all.  Her other published works can be found at Dreamspinner Press, MuseitUp Publishing and No Boundaries Press, and coming soon with both Extasy Books and Torquere Press. She has also begun to self-publish and is an editor at MuseitUp.