Welcome Hayley B. James to my blog today

I am very honored to have Hayley B. James as a guest on my blog.    Please give her a warm welcome. Let's find out more about her and her book "

Thank you for having me, Lily!

1-How long have you been writing?
I officially begin MM in 2006 when I started posting stories on aarinfantasy—an online forum dedicated to Yaoi.

2- What is your favorite genre to write?
I really like writing stories akin to mysteries and thrillers, even though I haven’t written a 100% mystery thriller yet. The closest thing is Fire Tango, but it’s really fantasy genre since the characters are demons and angels.

3-What are you working on now?
I have a few WIPs on my plate. At the moment I’m focusing on Seeking Solace which is a story of a suicide survivor and a private investigator.

4-When you begin a story do you start with character or plot?
I start almost entirely characters with a loose idea of plot. The plot tightens as the characters build it up around them with word count. I write practice scenes when I first get an idea and those scenes are for characters, not plot. I want to make sure I like the personalities before I dive in.

5-Tell us about your latest/upcoming release. What inspired it?
Paid Leave was inspired by Albuquerque and a joke. Once upon a time I tweeted that I love cops and coffee so I needed to write about a cop falling in love with their barista. Many months later I graduated from APD’s Citizen Police Academy with a lot of knowledge about day-to-day police work, a renewed gratefulness for police officers, and a jaded view of how the media spins facts against the police department. Paid Leave took a solid form from all that. I wrote a story where a cop falls in love with a coffee shop owner while writing out my anger with Albuquerque’s mind frame against the understandable and justifiable actions of their police. 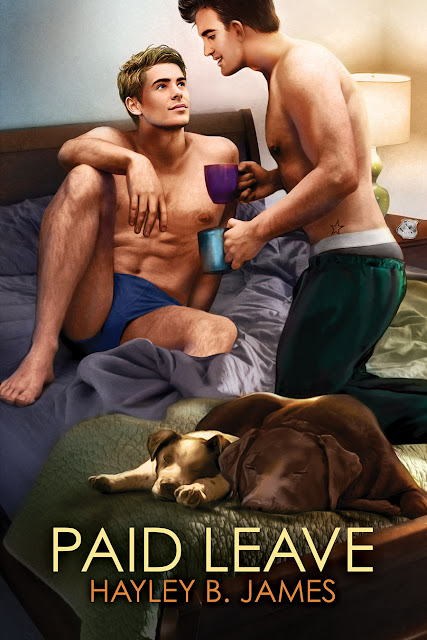 Paid Leave blurb:
Albuquerque police officer Benji Miller made the choice to hide his sexuality and devote his life to his career. He guards his secret carefully, believing he is protecting his job and happiness. Then, during a routine traffic stop gone awry, he shoots a suspect to protect a young girl, and his life spins out of control. A department-mandated paid leave rips away the only distraction he had, and he has to deal with the unsympathetic media who criticize the police department’s every move.

One day, needing to get out of the house, Benji walks into a café, where he meets Neal McCoy—a gay man living without shame, unafraid to speak his mind or stand up against prejudice. Benji quickly falls for Neal but struggles to combine his new love interest and his career. With the media threatening the careful illusion he’s built around himself, Benji can’t stand the pressure.

Benji has to decide: sacrifice his happiness in the name of his career and an easy life, or find the courage to give up the lonely existence he knows and take a step into the unknown.

Excerpt
Neal took a breath and leaned forward. “Can I ask a question about what you do?”

“If you mean to ask me about remodeling my house, yes you can.”

Benji folded his napkin and set it on the table. “Okay. Why not? Ask anything.”
“Why do you do it?”

Benji immediately believed Neal wanted to know why he shot someone. But giving him the benefit of the doubt, he took a mental step back. “Do what?”

“Why be a cop? You’re constantly under scrutiny over your every action. You’re like a celebrity, except the TV stations hate you and you can do no right. You save a kitten from a burning building, and the news wants to know why you didn’t save the house, even though that’s not your job.”

Benji smiled, surprised by Neal’s emotional outburst. “Do you have an officer in your family?”
“No. You’re the first I’ve ever met. I just don’t like how the news stations here portray the police. They’re bullies.”

“Some people believe the police are the true bullies.”

“Maybe those people have never truly needed saving.” Neal stood up and started to gather the dishes. “Do you want coffee?”

“I never answered your question.”

Neal sat down and touched Benji’s wrist. “No, you didn’t, and you don’t have to.”
“I’m an officer in order to be there for those people who truly need saving. There’s less heroics than one might think, but every once in a while, I feel like what I do matters. Between arresting crackheads and meth addicts, I might stop a robbery or recover a stolen vehicle.”
“You sound as if you love your job.”

“I do. Despite the bad days, I can’t imagine turning in my badge.”

Neal sighed and stood up again. “I’m jealous. I’ve never loved a job that much.”
“I thought you loved coffee.”

Benji got to his feet and carried the wineglasses to the kitchen sink with Neal leading the way. “And the yoga thing?”

“It’s not something I believe in. I practice for the exercise, not for the mental or spiritual balance.” Neal scraped stray noodles into the sink and dropped the plate into the other side before facing Benji again. “How about that movie I promised last night? I have cookies Kyle made. Coffee, cookies, comedy—the three Cs. Add the fourth, and you have one hell of a night.”

“Cock.” Neal gave Benji a wink and took the wineglasses from him.
Benji watched Neal’s back as he rinsed the glasses and plates.
The forwardness was still strange. Benji was used to plans being laid out—in much the same way as Charles approached their relationship—but it seemed different with Neal. He wasn’t hiding. He was being who he was. The desire for sex wasn’t out there in a whisper so no one else would know.

Hayley B James Bio:
Hayley B. James is a m/m romance author first published by Dreamspinner Press in March 2011. She writes novels about law enforcement (Undercover Sins, Paid Leave), artists (World on Fire), and fantasy creatures (Elemental Attraction series). Writing is her part-time job and full-time hobby. She reads m/m romance, mystery, real life crime, fantasy, and yaoi novels. She may or may not have an unhealthy obsession with police officers. It's still up for debate.