I'd like to welcome Catrina Barton to my blog today.   Let's find out more about her and her book "Dangerous Temptation."


1-How long have you been writing? I started writing in June of 2006
2- What is your favorite genre to write? Romance and it's many sub genres
3-What are you working on now? The second Caspian novel. Dangerous Temptation is the first of a series.
4-When you begin a story do you start with character or plot? Depends. Sometimes it's a simple phrase that won't leave my head, sometimes it's a "what if" question that spins into a plot, and sometimes it's a character that whispers to my mind and then yells if I wait too long, lol.
5-Tell us about your latest/upcoming release. What inspired it? Dangerous Temptation. I grew up outdoors {hiking, camping, fishing. Even baited my own hooks and cleaned my fish.} I love anything to do with nature, and tigers are my absolute fave animals. I've always wanted to write a shifter novel. I'm fascinated by the idea of shape shifters.
I researched all the different shifter myths in the world, and decided Asia's worked perfectly. After seeing picture of Borneo rainforest I knew where I wanted my location to be. The opening scene played in my mind like a movie. The more I thought about it, the more Kaitlin's and Cadmon's story took shape in my mind. 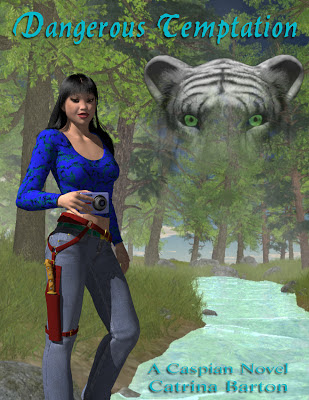 Dangerous Temptation:
Seventeen year-old orphan Kaitlin Sinclair's world gets turned upside down when she's forced to move half way around the world to Indonesia with her uncle she never knew existed. Things get worse when the demons she left behind in America follow her to the land of intrigue.

Her uncle forces her to attend a celebration where she meets Cadmon, a mysterious, captivating stranger, who reveals that he knew her parents. She uncovers secrets that in the wrong hands could destroy his endangered clan of were-tigers and the entire world.

When Kaitlin dives into a foreign culture, full of mystique and dangers everywhere she turns, keeping her heart safe might prove as impossible as staying

Bio
Catrina Barton is a real go-getter, who in 2006 turned her avid reading addiction since she was three, into a vigorous passion for writing. Especially Young Adult Romances. She draws on her knowledge as a Kung-Fu Instructor to make her fight scenes both realistic, and action packed.
When not indulging her fertile imagination to craft stories for your reading pleasures, she enjoys hiking with her family, and amateur belly dancing.
Her love of writing, and her family, rival her exhilaration from helping fellow writers. She is a proud member of many writing, and marketing groups, and an active participant at Critique Circle, and several other crit groups.
Writes reviews for Safari Heat, and Satin Sheets Romance.
<!--[if !supportLineBreakNewLine]-->
<!--[endif]-->

Favorite personal quote:
"An author cannot grow without both constructive criticism and encouragement."