I'd like to welcome Paloma Beck to my blog today.  Let's find out more about her and her book
"Hold My Hand."


1-How long have you been writing?
I started writing in high school but I got serious about it just a few years ago. Now for the past year, I've been writing full-time and am having a blast!
2- What is your favorite genre to write?
This is tough. I do both Contemporary and Paranormal, and very much enjoy them both. There's a mood each creates and depending on which way the wind blows, I'd take one over the other.
3-What are you working on now?
I've just completed my first self-published book, Hold My Hand. It's a Contemporary BDSM-lite Romance about Aubrey, a young woman filled with hurt, and William, a man who can't walk away.
4-When you begin a story do you start with character or plot?
The characters always come to me. In the case with Aubrey, she was the most demanding I'd ever experienced. In fact, I wrote nearly the complete first chapter from a dream I had about her where she was speaking to me about her life. I really felt a kinship with her and was excited to be able to tell her story.
5-Tell us about your latest/upcoming release. What inspired it?
After I wrote Aubrey's tale and began plotting the story, I was looking through some old high school writing. I found a poem that described Aubrey so perfectly, it was nearly eerie. I've incorporated it into the book as chapter headings now. After contemplating, I realized Aubrey brought with her some unresolved issues from my own life and she needed me to tell them. Writing her story released some demons of my own. 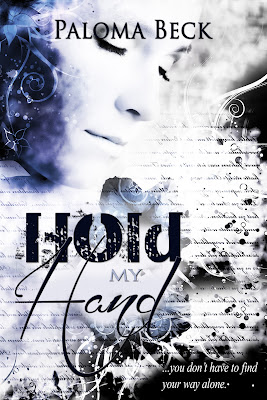 Blurb
Aubrey has been hurt in the past, discouraged and degraded by a heartless father. Still, William sees something in her that won't allow him to walk away. Instantly drawn to her but intuitive enough to take it slowly, he courts her. Then he bargains, persuades and seduces until he ensnares Aubrey with his commanding nature. He’s everything she ever needed but never had the courage to want for. Despite the fight she puts up in accepting William's lifestyle, the bonds he places on Aubrey give her a freedom she desperately needs. Together, they heal old wounds and find their perfect love.

Excerpt
© Hold My Hand, Paloma Beck, 2013
When he seated me on the edge of the chair nearest the fireplace and began to stoke the embers of the fire, I kept my eyes cast down. He made me nervous, those same nerves I felt once living under my father’s roof. No, I reminded myself again, not those nerves exactly. William told me I was beautiful so I know it’s not the same. He was nothing like my father though that tension –the tiny feeling of inadequacy I can’t quite shake- was so similar; I shied away from his gaze. Yet at the same time I craved William, his presence completely overwhelmed me.

He moved behind me, seated himself with his legs on either side of my body and pulled me down to him. My back to his front. My heat to his heat. My body to his body. I shivered, wanting nothing more than to be what he wanted me to be. I assured myself my desire to please was different this time. I was already pleasing William. He told me as much and I believed him. After all, I had to believe in something.
His fingers on my shoulders distracted me. “You’re so tense, sweet Aubrey. Won’t you just relax in my arms tonight?”

“Yes sir,” the whisper floated from my lips on a sigh. It was such a certain response, it left no room for me to fail or disappoint. I found comfort in the statement and relaxed into his body.
“Good. Well done.” His affirmation bolstered my confidence. I’ve not received many compliments that I can recall and it felt nice. I couldn’t help but smile while the pride at such a simple act made my chest feel tight.
William aligned his body against mine so that I could feel him as part of myself. Then I realized he could feel every inch of me against him. He could feel my imperfections. I tensed, wondering what he’d think of me when he got a closer look. I was no longer overweight but now I was slight and never held any real beauty. When he realized this, my time with him will most likely end.
He molded my shoulders and back with his strong fingers. “Relax into me and let me took care of you,” William tickled my neck with his words and a tiny shiver ran along my spine.
“I thought it would be the other way around.”
I felt his laugh against my neck. “You think too much. Time for thinking was over. Now simply trust in me to take care of you.”
His warmth enveloped me. I was caught in him, absolutely ensnared by all that he was.
About Paloma
Paloma Beck is a Romance Author living a life of contradiction... she's a happily married carpooling mom writing erotic romance. It's almost naughty! Paloma writes in both the Contemporary and Paranormal realms, journaling the stories her characters tell her, and they are anything but PG. She dabbles in vampires, witches, ménage, spanking and bdsm - all in her books, of course.

Paloma believes a daily dose of espresso and a good book make any day better.

She is currently working on a contemporary romance series about three brothers. Finding Home, book two, will be released sometime in 2013 with Secret Cravings Publishing. She also has a paranormal romance series, The Seven Sin Sisters, contracted with Secret Cravings Publishing, which will be released sequentially between August 2012 and August 2013.