I'd like to welcome Robert W. Birch to my blog today.   Let's find out more about Bob and his books, shall we?


1-How long have you been writing?

Back in 1957, at the age of 21, I was stationed in Korea and spent long nights alone in a radio hut that sat on the back of a two and a half ton truck parked in the middle of a rice paddy. To fill the time when no messages were coming in, I began writing short science fiction stories. Fifty-two years later these were eventually published. After returning from three years in the army, I became serious about my education and in 1967 received my Ph.D. in psychology from the University of Wisconsin.

I do not begin with an outline, and usually do not know how a story will evolve or how it will end. I begin with the main character and have often claimed I then allow that character to tell me the story and I only write it down. The initial chapters usually evolve slowly, but as the theme becomes clear I pick up speed. The plot eventually dictates the direction, but I need to come up with the twist and surprise ending.

The novella that is pending publication is REKINDLED DESIRE: Never too Late. As an aging male, I want to write about ageless passion, and to do so realistically. No marathon encounters in this book. GRAY PLEASURES, my first novel involving senior citizens, was published in 2007. 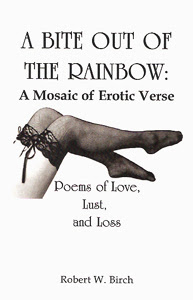 Tease me, sexy lady.
Translate your passion into motion
and move in those exotic ways
you know will stir my desire for you.
Be the bad girl tonight,
and in your dance,
show no mercy.

Taunt me, sensual being.
Make me beg that you come to me.
Fuel my desire,
but do not heed my pleas.
Show me your power
and arouse my hunger,
for I will want you all the more
when my eyes behold
what I cannot not touch –
just out of reach,
your beauty overwhelms me.

Dance for me,
For I am yours. 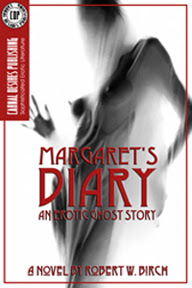 MARGARETS DIARY: An Erotic Ghost Story
Blurb
Kevin works for a moving company and has been given the job of emptying the home of Margaret, an elderly widow who had died alone.  In the process he meets her ghost, albeit as a much younger spirit. He also finds her diary and in it learns of the unsolved murder of her gay son. Kevin and his wife Cathy realize that Margaret cannot join her son and husband until her son’s killer has been brought to justice. Margaret leaves clues, but they are coded and not always easy to decipher. The questions become, who murdered the young man and way, and can Kevin and Cathy work on solving this mystery and maintain their active sex life?
Excerpt
Kevin stepped back into the hallway, where he felt a sudden chill. “God,” he yelled impulsively, for he beheld a brief flash of what appeared to be a semi-transparent naked young woman. She sailed silently across the hall, carrying a towel and disappearing into the bathroom. “Shit,” he mumbled, and then in a louder voice called out, “Who’s there?” He didn’t really expect an answer, and there was none – only the faint sound of what sounded like water running into the tub. He moved slowly toward the open door and looked in. The sound ended, and the room was empty.
He hurried down the steps, down the first floor hallway and out the door. Stopping on the front porch, he braced himself against a column of the porch roof. His whole body trembled. What the hell was that? he asked himself.  He reached for his cell phone, but hesitated. How could he describe to Cathy what he had seen, if he wasn’t really sure himself? And how could he tell her that he was so scared he almost peed his pants? He decided he would just have to get himself composed and go back in. He had to do so. He had a job to do, and he needed to finish before the temperature hit its peak. His boss would understand if he said it was too hot to finish, but not if he said he was too scared to even start.

Bio
After retiring, Bob moved to rural Ohio where he now resides with his wife, three dogs, two cats and two birds. His wife’s talent lies in the fabric arts, so as Bob writes, Sue stitches.

Bob’s poetry can be found at http://www.poetry-nut.com. His novels and short stories are described on his site at http://www.erotic-romance-novels.com
Posted by lily sawyer at Tuesday, April 02, 2013