I'd like to welcome author David Russell to my blog today.  Let's find out more about his book "Dreamtime Sensuality." 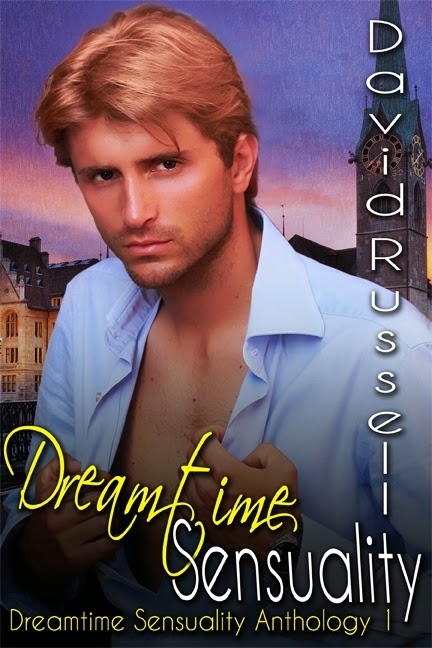 Dreamtime Sensuality
Many a dream can be realised with a little forethought. The characters in this quartet of stories are intelligent, sensitive and literary. They are also supremely voyeuristic and open-minded. Their intelligence is counterbalanced by inhibitions, which they can only lose by premeditated seduction scenarios, which relate intimately to their professional, creative and cultural lives. The great effort each couple puts into arranging a scenario seems to enhance the quality of the experience. A great source of inspiration for this and other works has been the novel The Girl Beneath the Lion by André Pieyre de Mandiargues.

Seductive Semaphore: Fashion Designer Bethesda and journalist Hector live opposite each other, with windows facing. They make initial contact through visible, provocative gestures. Soon afterwards, they get direct contact when Hector assists Bethesda with her folio. She invites him round to model for some of her fashion creations, and proceeds to seduce him. The seduction continues with a ritual visit to a sports centre, and then to a beach. They leave it open as to whether their relationship could ever become long-term.
The Heroine and the Author: Dreamer Hecate discovers she has a terminal illness. She wants to make the most of the time she has left by being celebrated in literature as a charismatic, legendary figure. She meets Ferdinand, a ghost writer, who is happy to undertake this massive project with her. In the process, She gets an idea of his physique through jogging and the fitness centre. Then there is a seduction scene inspired by the literary models of Sappho and Donne. Being ‘open-minded’, they make a pact for each one to go and have a sexual adventure – his hetero, hers lesbian. Their relationship is enhanced by this extra dimension.
Dreamtime Sensuality: Romona, highly literary and highly inhibited, goes to an exotic island location. She deeply desires a passionate encounter. At the Pension where she stays, she meets Stefano, who fulfils her requirements exactly. The proprietress of the Pension picks up on Romona’s shyness, and gives her reassurance, including some practice in the art of kissing. Romona orchestrates an elaborate beach seduction scenario, and they are both fulfilled. They never meet again, but their exchange of emails and text messages goes on indefinitely.
Dancing with Danger: Verona is a Scriptwriter and Gareth an archaeologist. They both have ‘retreats’ near the coast, and discover their common interests. Verona contrives a half-seduction on a deserted beach, wearing 18th century retro gear – related to their common interests. After some further encounters, they give each other a ‘dare’ to go and have a really risky encounter with someone really dodgy. Gareth finds a young woman on the run. Verona has a rapturous encounter with someone who gets hauled in by the police, suspected of terrorism. She uses her charm on the interrogating police officer to extricate herself. So Verona and Gareth both meet up again, to tell their respective tales.

Hecate read some verses of Sappho, which she felt totally appropriate to his slender grace, so nearly androgynous. She quoted a phrase demanding his fixed, concentrated stare into her eyes. The eye contact was clinched Hecate’s introduction was a quote from her.

Ferdinand responded to the prompt; he knew what he had to do—gradually, at intervals, he removed his garments one by one as she breathily read the hypnotic, seductive phrases.

His garments came off with ease and grace, he obviously had some long-repressed desire to do this. At last, he stood before her, beautiful, naked, and slender. Somehow, his spirit prevailed over his earlier reticence, he shed his shyness with his clothing. Since she saw him in trunks, Hecate anticipated this moment with such relish. If the pool had been empty when they were there, she would have taken them off there, or in the shower. Perhaps something could happen, or even be premeditated in the future, on a deserted beach, secluded amid the dunes.
She handed him a volume of the collected poems of John Donne. “Now, I think you know which one I want you to read me. Hmm…while we’ve been working together, I bet you’ve had some reveries of me undressing, you undressing me.”
“I have to admit that is so and I know which poem you mean, it’s Elegy Nineteen—To His Mistress Going to Bed.
“We really are on the same wavelength darling. I had learned of that poem as a young girl, with a desperate desire one day to enact it. Every word of it struck home as I disrobed alone, for years I yearned for that lovely partner to give me those instructions live.”
Ferdinand beamed, then quoted from near the end of the poem referring to the poet’s nakedness at the beginning of the action. Then he proceeded to read, with his lovely, hypnotic voice.

He really made Hecate’s girdle feel like Saturn’s rings As she undid her sash and cast it down, she felt her abdomen was bathed in heavenly light, visible only to spiritual eyes.

The request to remove her ‘breastplate’ gave her an etheric shudder. Taking off the brooch at the top of her dress felt like casting away a shield, affirming that strife and combat had been replaced by love.

In response to the exhortation to unlace, she felt deliciously nervous as her fingers twitched on her zips and buttons.

As the gown went off following the next command, Hecate felt she had emerged from a perennial cocoon, that she was the sun liberated from the constricting veils of night.

As for a ‘coronet’, Hecate was only wearing a slide, but removing it certainly helped her locks flow freely.

It was great to feel liberated from footwear; earlier on her high heels had felt so sexy. But now her stockinged feet tingled with electric desire.

With her underwear, admittedly she found nylon, calico and silk sexier than linen, but the word, so sensually uttered, really relevant. (from The Heroine and the Author – Story 2)
Book Links: Dreamtime Sensuality Antho - Devine Destinies
www.devinedestinies.com/Dreamtime-Sensuality-Antho/