I'd like to welcome guest author Daryl Devore.    Let's find out a little more about her. and and her book "Sexy Red Hood"
1-How long have you been writing?

I would say since elementary school. I don't remember when I started writing. Creative writing class in gr 10, an assignment was 5,000 word minimum story. I wrote a book. It was 80,000 words. The class was September to June and the teacher let me keep writing it instead of doing other assignments.

2-What is your favorite genre to write?

4-When you start a new story do you begin with a character or plot?

I think my books are more designed along the lines of the character drives the plot. Of my two WIP -

Capri's Fate - 40% plot 60% character. - I wanted to try writing a fantasy. I had the gist of the story laid out and then I let the characters fleshed out the rest. I had to dig into Capri's personality to figure out how to twist and turn her life around. Did some research on astrology and corporations. Plus studied up on the mythological Fates.

Dragon Fire – I think that was a 50/50 split. The whole story presented itself to me as I was driving down to my daughter's. Most inconvenient timing but I chicken scratched out notes and got the main points down and when I arrived I stayed up until 2 typing out the notes and the memories they jogged onto my laptop.

5- Tell us about your latest/upcoming release. What inspired it? 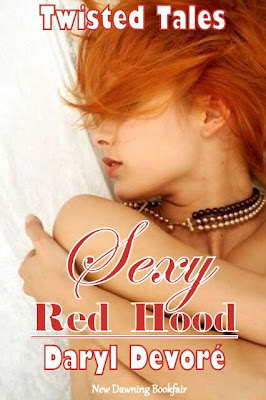 Excerpt:
When the elevator doors slid open, Red stepped into the hallway. Before her, stood the impressive glass and brass doors of Hood's Chocolatier--the corporate offices of one of the country's largest independent chocolate makers. She stepped through the doorway, and marched toward her cubicle.

Three steps from her destination, the word, "Esmeralda!" broke the silence.

"Where have you been? I've called and called."

"I noticed. Six voice mails and fourteen text messages. Nothing said urgent. You seem fine. I'm fine. So what's the big deal?" She frowned. What could be the problem? "Oh no, is it Grandma?"

Her mother threw her hands up. "Yes!"

"What? What's wrong with her? Is she sick? She didn't fall and break anything, did she?"

"She's driving me out of my mind."

Red bit back the sentence – Oh happy day – and instead managed to say, "What's she done now?"

"Not here. Come into my office."

"Can I go put my coat and things—"

Hearing her mother's sigh of frustration, Red surrendered then remembered that following her mother to her office would mean passing by the office of Stanley Parkinson, VP of Sales. She stood a little taller, pulled in her stomach and confidently strode near his office then deflated at the sight of his closed door.

Entering at the door marked R. Hood, Red had barely stepped into the office, when her mother pushed her aside, closed the door and stood before her. "Your grandmother has booked a stateroom on a cruise ship and is taking a man with her."

Sensing So, was the wrong answer, Red let her mother vent whatever bothered her. This day could still be saved. If her mother stayed focused on the crisis-of-the-moment she might forget the weekly discussion of her love life.

"Yes, Mother." Red unbuttoned her coat, dropped her gloves, scarf and onto the seat next to her then settled in the brown leather chair in front of the desk. Her mother walked around and sat behind her large, hand carved, oak desk. It provided an imposing barrier between mother and daughter.

"I haven't told you this before, but your grandmother's going through your grandfather's money faster than you can go through a tub of maple walnut ice cream after a breakup."

Folding her immaculately manicured hands and placing them on her desk, Red's mother looked up. "Your flight's at two."

The glass sliding doors to the ballroom were slid apart and the sounds of the orchestra floated out. “Care to dance with the big bad wolf? Emphasis on big and bad.”

“I’d love to.” She stepped into his arms.

Resting her head on his shoulder, Red let herself be guided around the deck, dipped and spun. Not once did this dance partner step on her feet or bounce her off a piece of furniture. When love ballads played, their bodies pressed close together. Red could feel his hard muscles pressing up against her soft curves. When the music picked up tempo, Red shook her breasts and playfully flaunted herself. She watched his eyes as they followed every movement of her body.

Laughing, they fell together. Will’s lips were on hers. His hands roamed up her ass and kneaded her flesh through her skirt and panties. He turned so she was between him and the ship’s railing. Slipping his hand under her skirt, up the back of her thigh, over the edge of her panties waistband, he slid his fingers down the curve of her ass.

With a soft moan, Red shifted her feet to allow his hand to investigate more intimate and sexually pleasing places. She reached inside her top and pulled her bra up over her breasts and rubbed her chest against his. Her nipples hardened with the heat of the friction.
“I want you,” he breathed into her ear.

“Take me”, was her breathless response.

He straightened and looked into her eyes. “Are you sure?”

“I’ve wanted to since the moment I fell into your arms. I’ve fantasized about you making love to me. Please, take me. I want you inside me.”

Without speaking or touching they walked to the elevator, rode to the fifteenth floor and turned in the direction of his room. He pulled the key card from his wallet, slid it through the door and waited for the little green light. He kicked the door open, scooped Red into his arms and carried her inside.

The room was lit with dozen of flickering candles. Next to the small table was a dining cart. On it was a bowl of whipping cream, a pot of chocolate being kept warm by a smaller burner and a dish of red strawberries. He kicked off his shoes and carried her to the bedroom. She flipped off her sandals a moment before her feet touched the carpet.

Red glanced at the candles and dessert cart and smiled at Will. He shrugged his shoulders. “Made a wish on a star.”