Anne Barwell is a guest on my blog

I'd like to welcome Anne Barwell to my blog today.  Let's make her feel welcome and learn more about her and her book "A Knight to Remember."

Thanks, Lily, for hosting me today.

How long have you been writing?
I've been making up stories since primary school, and writing them down. I didn't do a lot of writing while my children were small – having three children under two and a half doesn't leave a lot of spare time. About the time they started school I discovered the internet, and online fanfiction and got back into it again.

What is your favorite genre to write?
I love fantasy and science fiction and my stories often hover somewhere between, or are a mix of the two. I enjoy exploring 'what ifs' and throwing my characters into situations and seeing how they'll react. Those genres is great for that.

In saying that though I've also written historical fiction and enjoy that too, although the research required can be more than a little daunting. I know far more about WW2 now than I ever wanted to, and am gearing up for more research as my characters from Shadowboxing head further across Germany in 1944 in the sequel Winter Duet.

What are you working on now?
I'm on the second draft of an urban fantasy story called Shades of Sepia, which I'm aiming to submit to Dreamspinner Press early next month.  This story is the first in a series called The Sleepless City which is a joint project with Elizabeth Noble. We're writing alternate books, and she's already several chapters into the second book, Electric Candle.

I'm having a lot of fun writing this, and brainstorming plot and characters who are vampires, werewolves, and the like. It's very addictive. I've also got a Kiwi character in there, just because I can.  Here's the blurb for Shades of Sepia:

A serial killer stalks the streets of Flint, Ohio. The victims are always found in pairs, one human and one vampire.

Simon Hawthorne has been a vampire for nearly a hundred years and he has never seen anything like it before. Neither have any of others who make up the team of supernaturals he works with to keep the streets safe for their kind and the humans who live in this city.

One meeting with Simon and Ben Leyton finds himself falling for a man he knows is keeping secrets, but he can't ignore the growing attraction between them. Ben has only recently arrived in Flint, and finding it very different from his native New Zealand, but there's something about Simon that makes Ben feel as though he's found a new home.

After a close friend becomes one of the killer's victims, Simon is torn between revealing his true nature to Ben, and walking away and avoiding the reaction he fears. But with the body count rising and the murders becoming more frequent is it already too late to prevent either of them from becoming the next victim?

When you begin a story do you start with character or plot?
It depends on the story, sometimes the characters turn up first, sometimes they take shape as the plot takes shape.  For my new release A Knight to Remember, I knew I wanted to write about dragons, and Aric and Denys turned up a short time later. In Shades of Sepia, I already had Simon and Ben in my mind as characters, and wanted to tell their story which morphed into the first book of The Sleepless City series. My writing is very character driven. How my characters react to situations when I write is sometimes not what I expect and it changes my original outline somewhat. I've found from experience it pays to go with the flow and follow the characters, within reason, as they usually know what they're doing. Or are very persuasive in convincing me that they do! Characters often show up with a backstory, and I learn more about their history as I write – they often come up with details I didn't know about. It's part of the fun and the bit I really enjoy about the writing process. The plot then needs to adapt to keep with the characters, so it's very much a give and take process.

Tell us about your latest/upcoming release. What inspired it?
A Knight to Remember was published by Dreamspinner Press on 28th June.  It's a fantasy story about dragons and quests, with a few twists. It was inspired by a joint author chat in which another author, TJ Klune asked each of us which fairy story we'd like to rewrite. Mine was St. George and the Dragon, which is why Aric's sister is called Georgia, although she's far from a damsel in distress and the story morphed into something very different so you'd have to squint very hard to see the connection.  I had a lot of fun writing it and brainstorming the world building and the dragon mythos. Naturally as all my stories too, it turned into book 1 of a series although it was originally a standalone.

One day I'll write a story that doesn't do that but I'm not holding my breath. 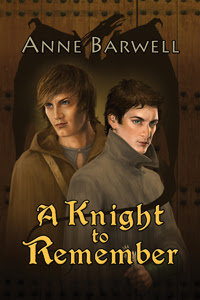 Blurb:
"The last of your line will be in the embrace of a dragon."
Aric, Crown Prince of Astria, has been brought up to believe that all dragons are evil. But when he speaks with one, he finds himself questioning those beliefs. The dragon tells him to find a sword in Sherwin Forest to save not only his kingdom but also his sister, Georgia, who must otherwise wed the prince of a neighboring kingdom.
At the start of his quest, Aric dons a disguise and meets Denys, an archer and herbalist who lives alone at the edge of the forest. Denys agrees to guide Aric into the forest, but then Georgia appears, revealing Aric’s true identity.
However Aric learns he is not the only one keeping secrets. Denys has a few of his own that could change both of their lives forever.
Excerpt:
As soon as Aric reached the trees, Denys began to run, only pausing at intervals to rest his hand against a tree and to wait for Aric to catch up. Despite the dense undergrowth Aric had noticed earlier, their path remained clear so they didn’t have to break their speed.
Aric’s heart was pounding, his breathing labored. He couldn’t remember the last time he’d had a workout such as this. He’d relied on his horse for far too long. There was something to be said for traveling like this, though; it brought with it a sense of freedom, of being one with his surroundings that he’d never felt before. Part of him wished it could go on forever, but his body protested the thought.
He gritted his teeth, determined to keep up and not show any weakness.
Finally Denys came to a halt. Aric stood, his hands on his knees, breathing heavily. Denys retrieved his water bladder and drank deeply. His skin was flushed, but that was the only outward sign of his recent intense physical activity.
“We need to rest for a few minutes.” Denys shook his head. “The men have divided into two groups. We have shaken the first but the second will be upon us as soon as we leave the forest.” His expression was grim. “You can surrender if you wish, but I’d prefer not to. I have heard stories of these men. Even if they are directed to bring us in alive, most of their prisoners arrive at their destination very much the worse for wear, and that’s if they’re lucky.”
Aric wiped water from his mouth with the back of his hand. He lowered his water bladder. Could this Morwenna know about his quest? Was she working for King Malachite? It was the only thing Aric could think of that made sense. If that were the case, telling these men he was Prince Brandric of Astria, and showing them the crest he carried as proof, would not deter them from doing what they’d been paid to do. From what he’d overheard, King Malachite wanted to invade Astria. The sword had the potential to be a powerful weapon in the hands of whoever wielded it. If Astria possessed it, it would give her the means to protect herself from Logan. But if Logan’s king got hold of the sword first, there was the chance it would provide a magical advantage Astria had no hope of defeating.
According to legend the sword also had the means to unite kingdoms and bring peace to the land. Naturally, as seemed to be the way of legends, it wasn’t very clear as to how it could be used to accomplish that goal. It was just as vague as the dragon prophecy that had haunted his family for generations. The price for peace achieved through a bloody war could be a harsh one, especially if it resulted in a king such as Malachite upon the throne.
“Perhaps you are right, and whoever these men are working for know we are looking for the sword.” Aric met Denys’s gaze directly. “Who I am does not appear to matter to them.” Otherwise why bring down the wrath of Astria by killing its prince? If they knew about the sword, they would know who Aric was. Wouldn’t they? But how had they found out about the quest? Georgia wouldn’t have said anything, and the dragon…. The dragon was an unknown factor in all of this. Even so, Aric knew his trust in it was not misplaced. It? Him? It had sounded male, but who knew if that meant anything. There was so much he didn’t know about this, and that in itself did not bode well.
Denys raised an eyebrow, but Aric smiled thinly. “We fight,” he told Denys, “and then I’ll tell you everything I can about what you want to know.”
Buy link:
http://www.dreamspinnerpress.com/store/product_info.php?products_id=3954&cPath=426

Author bio:
Anne Barwell lives in Wellington, New Zealand.  She shares her home with two cats who are convinced that the house is run to suit them; this is an ongoing "discussion," and to date it appears as though the cats may be winning.

In 2008 she completed her conjoint BA in English Literature and Music/Bachelor of Teaching. She has worked as a music teacher, a primary school teacher, and now works in a library. She is a member of the Upper Hutt Science Fiction Club and plays violin for Hutt Valley Orchestra.

She is an avid reader across a wide range of genres and a watcher of far too many TV series and movies, although it can be argued that there is no such thing as "too many." These, of course, are best enjoyed with a decent cup of tea and further the continuing argument that the concept of "spare time" is really just a myth.