I'd like to welcome guest author Tali Spencer to my blog.  Please make her feel welcome and let's find out more about her and her book "Thick As Thieves."

1-How long have you been writing?
I think I started writing in the womb. When I was nine I wrote a poem about daffodils that was published in the school magazine and I was hooked. I’ve been writing and publishing ever since. I won’t say how many years I’ve been at this, but it’s been quite a long time.

2- What is your favorite genre to write?
Fantasy romance, hands down. I also enjoy writing science fiction. Any genre that allows me to create entire societies and populate them, then have interesting adventures, is where I want to be. I would love to write a mystery, or a quirky contemporary romance.

3-What are you working on now?
I’m writing the next of my Uttor books, Victory Portrait, a M/M novel about a victorious general and the slave-prince whose kingdom he conquered. It involves an artist, inventive use of paint brushes, and an emperor who gets called out for tricking the general. I’m expanding the original story, which was posted online, with additional characters and scenes. The prince is a more active character in this version.

4-When you begin a story do you start with character or plot?
Character, almost always. I like strong plots, but I adore compelling characters. In the end, they combine for a good tale.

5-Tell us about your latest/upcoming release. What inspired it?
Thick as Thieves started life as a Wednesday Brief. That week’s prompt was unicorn, mandolin, and some kind of plant. I was in the mood to have fun, so I came up with Vorgell, a hulking barbarian who uses the unicorn’s horn as a dildo and… well, it took off from there. Consumed by thoughts of sex, Vorgell teams up with a sexy male witch who needs to free himself from a love spell gone bad. The book was a blast to write. Readers can find the original prompt still perking away in the first few pages of the novel—it’s all there in the excerpt. 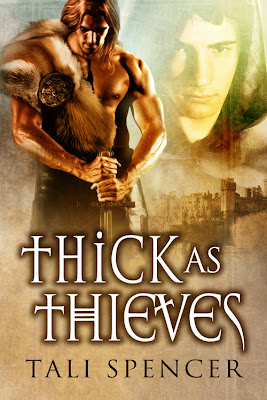 Blurb
After Vorgell the barbarian fucks himself with a unicorn horn, he ends up in a cell with Maddog, a pretty young thief. It’s lust at first sight for Vorgell—but honestly, he can’t help it. Unicorn horn is a potent aphrodisiac, and now he can’t stop thinking about sex. Luckily, Madd is one male witch who knows how to put Vorgell’s new magical body to good use when he tricks Vorgell into a kiss that helps them escape.

Vorgell may desire sex in general—and Madd in particular—but Madd has no intention of being screwed by a man twice his size. He has problems of his own, including an enchanted collar that causes him to desire his most hated enemy. He wants that collar off as soon as possible, but that requires stealing a basilisk egg from the castle they just escaped.

Drawn together by lust and magic, the two men join forces and soon find themselves up to their necks in witches, wizards, and trouble. Vorgell and Madd might just be perfect for each other, but first they have to survive long enough to find out.

Excerpt
Vorgell tumbled against the hard floor as the cell door slammed shut behind him with a clang far too final for his liking. Maybe Baron Flemgu hadn’t been kidding when he’d promised to lock him away and let him rot.

Startled, Vorgell looked over his shoulder. Another man sat in the corner, wrapped in a cloak and hogging the cell’s only patch of light and probably warmth. From what Vorgell could see of him, he didn’t look like much of a threat. He was small, dark-haired, and beardless, with the soft looks of some high lord’s fancy boy. Vorgell had golden hair and a warrior’s body, boasting the scars of many battles. He came from the mountains far to the east of this land, though his band of warriors had been captured and consigned to a slave trader. That indignity had lasted only as long as the slaver’s skull. Since then, Vorgell had made his way to the city of Gurgh—a den of murderers and thieves he had gladly departed so he might try his luck at hunting witches in the wooded wilderness around Baron Flemgu’s castle. And now he was here, in a cell at the tail end of a string of bad decisions.

Difficult as it was to ignore the other prisoner, Vorgell pushed himself upright and peered up at the high barred window. Judging the distance, he crouched and then leapt. He was able to grasp the window ledge with his fingers and pulled himself up until he could just see the top of a line of trees.
“Impressive,” said his companion. “I would have thought you too bulky to make that jump.”
“I’m tall.” That was an understatement. He stood head and shoulders even over the tall men of Scur, and the men of Gurgh were not fit to hold his spear. Vorgell released his grip and dropped back down, landing on his feet. He turned eagerly to his pretty cell mate, happy that in his travels he had learned to speak the local tongue. “My name is Vorgell.”

The little guy snorted. “All that gets you, apparently, is guest accommodations in the baron’s tower.”
“Same fine accommodations as you. What did you do to piss off the baron?”

“You first, big guy.” A smile like a fisherman’s knife flashed his way. The boy had pretty teeth and secretive eyes with long thick lashes, set in a face fetching enough to belong to a girl. Vorgell’s cock thickened, his excitement coming to a boil despite his efforts. He couldn’t help it. For the last three days, all he’d wanted to do was have sex.

“I killed a unicorn,” he managed, though he couldn’t stop staring. The other man’s body possessed a delicate, graceful build that only encouraged thoughts of fucking him here and now. “I was hungry. Thought it was a deer. Turns out unicorns aren’t very big.”

Smile vanishing, his companion sat up straighter. “You killed the unicorn?” His black cloak fell open just enough to reveal a tempting glimpse of skin beneath a stained shirt. “What about the horn? What did you do with that?”

Vorgell flushed. “I was hungry, as I said. There were these berries growing where the unicorn had fallen, and—”
“Love berries. They grow wherever unicorn blood falls.”

“So they tell me. All I remember is having vivid dreams about, well, erect members. Apparently the creature’s horn was too… shapely to resist. When the baron’s soldiers caught me, I was fucking myself with the thing. Unicorn horns dissolve inside, did you know that?”

“Actually, I do.” At least it sounded as though the man believed him. “Are you telling me your barbarian ass consumed the whole horn?”
“Yes,” he admitted.

Author bio:
Tali Spencer fell in love with writing at an early age and never stopped. Thanks to a restless father, she grew up as a bit of a nomad and still loves to travel whenever she can. Her longest stint in one place was Milwaukee where she went to college and enjoyed a series of interesting careers including respiratory therapist, airport executive, and raising three surprisingly well-adjusted sons. She later married her true love and put down new roots in Philadelphia, where she lives in an ongoing Italian American family sitcom. At least she’s learned how make good pasta. When not writing, Tali reads everything from sweet goofy romances to Lebanese cookbooks, manages her fantasy football team—go Gekkos!—and takes long walks with her loving, if slightly neurotic, poodle.