I am honored to have author Draven St. James to my blog today.  Let's find out more about her and her book "Grey's Hidden Fire."

1-How long have you been writing?
I'd say I've been writing stories since I could put pencil to paper and create words.  But I've been writing in the genre of erotica for about five or six years.  Give or take a sexy word that thrust its way into the text.

3-What are you working on now?
I'm always working on about five books on any given day.  It helps the writer's block to be able to jump to another book when I get character cock blocked.  But the main books are a second book to follow Grey's Hidden Fire and the beginning of a shifter series.

4-When you begin a story do you start with character or plot?
Well, it depends.  If it is the start of what I would like to become a series I generally start with the plot.  Now if it is a second book in a series I start with the character because I have built a basic construct of them in the previous book.  By giving the character more dimension their story practically tells itself.

5-Tell us about your latest/upcoming release. What inspired it?
My upcoming release on July 9th is about two firefighters who open themselves up to the possibility of being together in spite of all the obstacles that arise.  On the one hand Grey is led to question his sexuality.  Then Mica starts to question why he is living the lie of a closed life for everyone else and not being open with himself. They find the answers with one another.
I was inspired to write this because I think that many people feel alone in their desires and do live a lie out of fear.  Not just fear of strangers' open aggression against homosexuality but also out of fear of their family's responses.  I wanted to write a book about discovery and acceptance. Oh and let us not forget it gave me the best excuse to write amazing, intense, wickedly decedent scenes of the physical *wink-wink* expression of that acceptance. 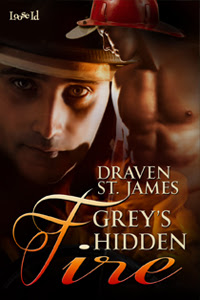 Blurb:
Grey's entire life is wrapped around his job as a firefighter. It is all he has ever wanted. That is until his new coworker Mica Cruz saunters through the door with his smoldering dark looks and dimpled grin. Suddenly he finds himself wanting to get to know what Mica looks like out of his gear and between the sheets.
Mica has one rule…keep his work life and his personal life separate. It was easy enough to follow until he meets Grey and finds that his rule can't stand up to the fire that Grey ignites. There's one big thing standing in the way of all of his lust filled musings. Grey is straight.

In a profession where being gay is often kept quiet Grey must come to terms with his growing attraction to Mica. How much is he willing to sacrifice? Can they come together before someone's hatred threatens to destroy them both?

Excerpt:
Mica walked into the dark room that contained two bunk beds. Grey’s huddled form made a silhouette against the darkness on one of the lower bunks, and Mica stretched out on the other. Grey’s shifting sent the sounds of a creaky mattress across the small space.

“Are you gay?” Grey’s words shattered the silence with their quiet intensity.

Mica felt like all the air had been sucked from the room. No one had ever out-and-out asked him if he was gay. He was fairly certain it was because he didn’t look like the stereotypical gay man. He also didn’t act like what his coworkers had always described as a gay man. He wasn’t effeminate. They were never cruel, but there was a level of mocking when they spoke about the topic. The reaction to the answer to this one question could screw his whole world up, but he didn’t feel like he could lie to Grey.
“Yes,” he responded in a low voice. He held his breath and waited for some kind of verbal or physical explosive response. There was nothing, just the soft sound of Grey’s breath.

Mica sat up and stared into the darkness, his mouth hanging open. “What?” he asked in a loud whisper.
“In your fantasy, I must have been pretty good, right?” There was humor in the other man’s voice. Humor, but not ridicule.

“Yeah, you were pretty good,” Mica conceded. He lay back on his bed and laughed softly. “You were really good.”

“Is that what you are? Dominant?”

“I…” Grey hesitated. “Are you a top?”
Mica snickered and smiled broadly at Grey for having the courage to ask that kind of question. “Yes and no.”

Grey chuckled. “How does that work?”

“I wouldn’t mind bottoming for the right guy,” Mica confessed. He had never said that to anyone. He had actually never bottomed, but if given a chance with Grey…he’d be tempted.

Mica glared hard into the darkness. He wished he could look into Grey’s eyes, see what was in Grey’s mind. It was damn difficult to judge what a man was thinking simply by the tone of his voice. Grey didn’t seem to have much of a problem with Mica’s being gay. If anything, he sounded intrigued.

The weight of the silence was heavy. Had Grey gone to sleep that quickly? Mica wanted to get up and turn on the light, but he didn’t think Grey would appreciate it. It would feel too much like a spotlight during an interrogation.

“Yes,” Grey admitted. Although the brief moment of hesitation was curious.
“Thank you, then, for not freaking out about earlier,” Mica said into the void. His face heated at the words. He wanted to add to that, but he didn’t know what to say. Apologizing for using someone to get off was a new thing to him. In his early days of coming out he’d had his one-night stands with no apology. Somehow this entire situation held a higher level of intimacy. Maybe it was the sharing of secret thoughts in the dark.

Mica’s eyes widened. He couldn’t have heard that right, or he’d processed it incorrectly. “Huh?”
“I mean, what was your… What was the whole fantasy?”
Mica had to sit up to hear the whispered words. “In the shower?”

“Yeah.” Grey sighed. “I mean, I know I was…I mean…in the end…sucking…”
Mica could practically feel the heat of the other man blushing across the room.
“Are you seriously asking for the setting of my jack-off session?” Mica chuckled.

“Well, when you say it like that…” Grey’s voice filled with discomfort. “I guess it was an odd question. Never mind.”

Grey sounded mortified. Mica didn’t know what drove Grey to ask the question, but Mica wanted to share the fantasy with him. After all, Grey had asked. No one could fault him for handing over information that had been requested.
Mica lay back and closed his eyes. “You came into the locker room as I was taking off my T-shirt. You wanted to know if I needed any help cleaning up, or if I had any pain from the fire.”
He paused to see if Grey would stop him. If Grey had changed his mind about wanting to know Mica’s hot fantasy. A fantasy where Grey was the star. He heard nothing but Grey’s breathing. “Are you with me?”
“Yes.”

If Mica hadn’t been listening so closely, he wouldn’t have heard the response.

“Okay, so I told you my shoulder was really hurting from when I pushed against the door frame to make it outside. You came up behind me and ran your fingers over my shoulders, massaging. I could detect the faintest touch on my neck, where it felt like you’d kissed me. My cock twitched, and I barely managed to keep from groaning. You felt my body tense, so you pulled away and turned me around. You asked if I was okay, if I needed any other help.” His voice became hoarse with arousal.

“Well, it is a fantasy. Give me a break.” Mica laughed. “Anyway, of course I was shocked by your offer, but so fucking hard because your hand was stroking my dick that I nodded. You pushed my briefs down and wrapped your fingers around my cock. Your hand felt amazing. It was so warm and rough. I rocked my hips into it.” His cock leaked. The arousal was ten times what it had been in the shower. Describing the fantasy for Grey was hotter than he could have imagined.

“And?” Grey asked, his voice ragged.

Mica propped himself up on his elbow. Was it his imagination, or did Grey sound turned on?
“Then you swiped your finger over the head of my dick, getting a drop of precum. You brought it to your lips and sucked it off. You told me it tasted sweet and salty and that you wanted more.”
Grey’s breath came faster from across the room. Holy shit. Just the thought of Grey getting hot from the fantasy was enough to make Mica’s cock throb.

“Then what?” Grey whispered.

Draven St. James resides in the great northwest and the nine-month rainy season provides her with a great deal of writing time. She holds degrees in psychology and English.  Both of which have boosted her mad skills in describing the characters in her books as well as developing their psyche.  She attended school at the University of Oregon so she is a HUGE Duck fan.
She comes from a large riotous family.  They provide her endless fodder for all of her books. Not a day goes by that something noteworthy doesn't pass by to wake up the muse that resides within.  She has traveled a great deal but has found that she loves the ocean most of all.  She finds an equal amount of enjoyment when cheering on the Ducks as she does in the silence of rolling up her pants and fishing in the river.  But at the end of the day sitting on the couch, coffee within reach, laptop at the ready is where she finds her peace.
Posted by lily sawyer at Tuesday, July 09, 2013