I'd like to welcome Edie Hart to my blog today.  Let's find out more about her and her book "One Bad Day."


1-How long have you been writing?
I've been writing on and off my whole life.  I've always loved books.

I love romance.  I'm a sucker for a happily ever after.

I'm working on Book 2 in the One Day series.  This is Burg's story.

My latest release is called One Bad Day.  It's inspired by having to dress as a mascot in a previous job . I added a scary parking garage that I used to have to park in.  The story evolved from there. 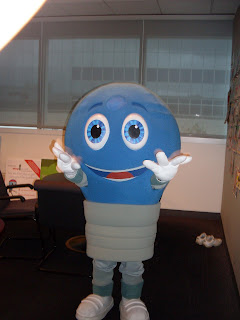 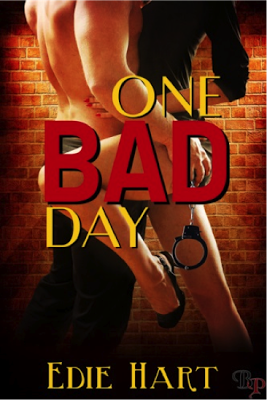 Formats Available In: All eBook formats

Blurb: Tessa is having one seriously bad day. After agreeing to dress as a cheesy mascot at a convention for her boss, her clothes get stolen, she gets chased through a sinister parking garage, and her apartment gets broken into and turned upside down.
Gray, an off-duty police officer, can’t resist the sexy legs he sees in costume at a hotel convention. When he catches sight of her running for her life through a dark car lot, he's determined to find out what her story is and ends up promising to keep Tessa safe...even if that means taking her home with him.

Gray stepped outside of the hotel ballroom hoping the air would be cooler out there. He hated stuffy gatherings. Hell, he hated weddings. How two people could think they'd love each other forever was beyond him. Gray didn't do love. Which was why he was stag at a co-worker's wedding. He'd originally planned to invite Monique, but several months back she'd become demanding and talked about moving into his place with hearts and flowers in her eyes. So he'd ended it. Deep down, he'd known that she didn't really want him. She wanted any warm body that would take care of her. She had slowly been trying to mold him into some GQ tycoon, telling him what to wear, how to act, and even going as far as telling him what he needed to do career-wise.

A loud crash on the other side of the hall caught Gray's attention. In the open ballroom across the way he saw legs. Glorious legs in strappy high heels. The beautiful legs were tangled on the floor and attached to an ass that was just as gorgeous. After taking a closer look, Gray realized that above the amazing ass was an enormous, white light bulb-shaped head with blue googly eyes. It had blonde hair and wore a glittery purple hat. The tangled-up legs and heels were flailing around in a pile of what looked like empty light bulb boxes. Several gentlemen nearby were quick to help Legs get her feet beneath her. From their smiles and laughter he could tell that they were all quite happy to be of assistance. Gray didn't blame them.

He watched Legs find her balance in those high heels, and with a little wiggle and tug of her skirt she went on her way.

Edie Hart was born in the Northwest suburbs of Chicago, where she now resides with her husband, two children, dog, and three cats. After spending her childhood making up stories in her head, she finally decided to put them on paper. What came of it was her first novella, One Bad Day. Edie is a die-hard romantic and believes that everyone deserves to be loved unconditionally—both in print and real life.

Edie also admits that "Edie Hart" is a pen name and an alter ego to an otherwise boring wife and mother. Edie is 20 pounds lighter, loves to skydive, travels to foreign places, and is a total sex kitten as compared to the uninteresting other half who is none of those things.

In reality the counterpart of Edie is a lackluster 40-something-year-old, whose main goal is to keep The Big One (The Boy) from torturing The Little One (The Girl). This week he hit her in the head with a 12-pack of Juicy Juice. Last week he left ravioli handprints on the back of her white T-shirt. The week before that he told her she was adopted and she believed him.

To learn more about her, and find out what The Big One and The Little One are up to, visit her via her website, Facebook, or Twitter:

Have you ever had one of those days?

I decided after I dropped the kids off at school that I was going to clean the cat boxes. I get downstairs… no litter. I can’t even blame it on anyone because I clean the box and I buy the litter… so I decide to run to the store (I have to pick up a prescription anyway, they called yesterday and said it was ready).
I get to the store, get the litter – pharmacy doesn’t open for another 15 mins so I look around and, yes, I do have a problem, I’m an impulse shopper – which means 20 mins and $50 in stuff later I go to the pharmacy for the prescription. Um, yeah, it’s not ready. They don’t know why they called and said it was ready, ’cause it’s not. I can come back Monday and get it.
Ok, I figure, I’m out, I’ll get some nice fresh fruit and have fruit salad for lunch. I don’t like the fruit at this store, so I go across the street to another store where the fruit is better priced. I find some fresh stuff – strawberries, blackberries, raspberries – and I get some jarred stuff – not as healthy, I know, but tasty and I love jarred pears and peaches.
So, I get all my stuff, lug it out to the car, drive home and start bringing my goodies inside. And of course, it’s me, so the bag breaks in the driveway and all my fruit goes splattering everywhere. There’s glass all over, the strawberries and raspberries popped out of their plastic containers and are scattered across the driveway. I live in a suburban neighborhood, the houses are fairly close together. The woman two doors down does daycare out of her home, my neighbor is retired, the guy across the street works weird hours…
My reaction to seeing my beautiful fruit salad colorfully decorating my driveway is to yell “F—!” I then realize that someone may have heard me and yell “Ohhh S**t!” while looking around. Realizing that I’ve done it again, I mutter “Dammit! Dammit! Dammit” under my breath.
I decide to take my other purchases inside – I have some hamburger meat that I don’t want to get warm outside. So I take my blackberries – which has popped open, but is salvageable – along with my other stuff and put it inside the doorway. I figure I’ll throw the blackberries in some vanilla yogurt – not as good as the fruit salad idea, but at least I have my blackberries.
I get a broom and start cleaning up the sticky mess and proceed to cut my finger. Not a bad cut, just enough to p* me off a little bit more. I get the mess in the driveway cleaned up and leave the broom in the sink – now I have to rinse that because it’s all sticky – and get ready to put stuff away.
I find the blackberry container, but all the blackberries are missing. I’m thinking WTF. I look down and there’s a dog toy next to the plastic container. Oh S**t! And I mean Oh S**t because the damn dog can’t eat stuff like that cause it gives her the runs. I then start to put my stuff away… well, it’s all sticky. I have to rinse everything and I don’t want to put it away wet, so I leave all my stuff spread all over the counter.
Okay, now I can finally clean that cat box. I go down and start cleaning and realize that I’m going to have to drag the vacuum down two flights of stairs because my broom is sticky. As I’m vacuumming, I look over, and the cats are out of food. Dammit! That’s The Boy’s job! Why didn’t he feed them?
I decide I should go and check on Gus – the old man kitty – to make sure he’s ok. He’s got a nice little bed with a heater under it cause he gets cold - which is in the other room. I peek around the corner and – I’m not kidding – there’s a paper plate next to Gus’ bed filled with chips! The Boy fed the 19 year old cat chips!!
I feed the cats, finish the catboxes and rinse the broom. I’m sticky and covered in cat litter dust plus whatever else I’ve encountered on my travels through my house that has decided to stick to my fruity sweatpants, so I decide I need a shower.
I get in the shower and am all wet and realize dammit! I left my new disposable razor that I just bought downstairs. I end up using my old one which is totally dull – the reason I bought the new one.
I am ready to wash my hair and Oh My God there’s no shampoo!! Dammit! I find The Girl’s No More Tears Smurf Berry Shampoo and end up using that.
Now I am sitting at my laptop, it’s lunchtime, I haven’t gotten any work done, I don’t have any fruit salad, my armpits are stinging like crazy, I smell smurfberrylicious and I’m waiting for my dog to crap all over my house…