Well it's that time of the week again.  Time for you to see what Tom and Ben are up to.    I did this week's story based on a photo prompt that I will show you at the end of this story

It was an idle Wednesday night; Ben was running late coming home from work.  He had a house he was showing and he’d called to let Tom know that he’d be late.   This wasn’t working out the way Tom planned.  He had a big surprise for Ben and he had to get out of the door by five o’clock.  It was four-thirty now.   He had dinner reservations at the Hometown Kitchen in Quarryville.

His phone rang a short time later.  “Hi Pete. No, Ben isn’t home yet. I know, just tell Amy I’ll see if I can hurry Ben along.”  Tom was starting to feel the pressure. He wished he could change plans, but it was too late now.  Come on, Ben, where are you? Tom had his cell phone out, his finger about to hit Ben’s call button when the front door opened.

“Well, go get changed, we have to leave in five minutes.”

“Why the rush? Where are we eating?”

“We have a six o’clock reservations at Hometown Kitchen.”

“Isn’t that in Quarryville?  That’s pretty far away.  Why can’t we eat at our usual place?”

Cause I have a surprise that is waiting to happen while we’re out and we need to be so far away so what has to happen can happen. Tom thought to himself, but to Ben he said, “One of the guys at the station recommended this place and said we just have to eat there.  So I thought we’d try someplace different.  So come on and get ready so we can go. I’m starved.”

Tom gave him a gentle push toward the bedroom.  He was relieved to be on the road a short time later, now the surprise could start.

It was a half-hour drive to the restaurant. They needed to stay out as long as they could. He was bad at keeping secrets; it was hard to keep from spilling the beans.  So he kept his conversations about his latest rescues, new members of the department, and he asked Ben about his latest sales.  At the end of their meal, Tom paid the check, over Ben’s objections.  They exited the restaurant and walked back to their car.

“Shit, we have a flat tire,”  Ben exclaimed shaking his head.

Tom had to fight the urge to laugh or smile.  “Too bad, let’s get the trunk open.”  Tom spotted Pete’s car in the distance. He knew the flat tire was his handiwork.  They needed this delay tactic so they wouldn’t get home too soon.

“Hey, I’m going to stop and fill the tank.” Tom made sure he was the one driving; he thought an extra delay tactic would be in order.

“I thought you just filled it yesterday?”

“No, honey, that was a few days ago.  Must be your Swiss cheese memory again.”  Tom was lying. He had filled up the tank yesterday and told Ben when he’d gotten home.

“It’s okay, Ben, I forget stuff sometimes, too.”  Tom pulled into a Hess express station.  “Hey, they have a Dunkin Donuts here, how about getting some donuts? I can bring some into the station tomorrow.”

They spent about fifteen minutes at the station before they were on the road again.

Tom hoped that the surprise was ready when they returned.

He pulled into the driveway and parked his car next to Ben’s in their two-car garage.  The automatic door opener closed behind them and Tom took the box of a dozen donuts inside, ahead of Ben. To all intents and purposes, the house looked normal.

“Something isn’t right.” Ben looked around.

“I don’t see anything missing.” Tom tried to figure out how to get Ben into their bedroom.  “But, just in case, let’s check the master bedroom. “  He led him to the back of the house.  Ben went in ahead and then spotted their master bathroom.

“Tom? What…what’s going on?”   Ben noticed that their bathroom didn’t look like it did when they left.
Before the renovations: 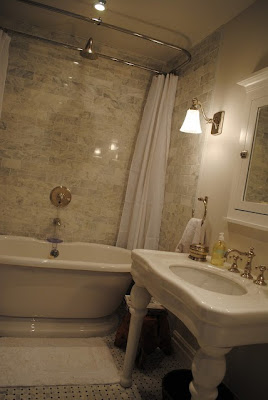 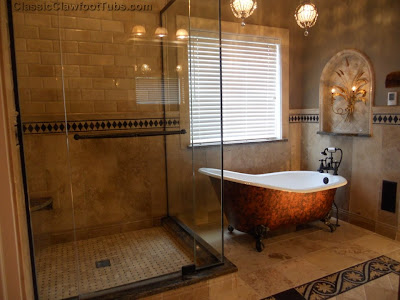 “Surprise!”   Ben turned around and saw Tom, then looked over to who had yelled surprise. He spotted a woman with long red hair, with a TV crew behind her.   “I’m Amy Matthews and you’ve been raided.”  She explained how she was from the HGTV show “Renovation Raiders.”

“You were in on it?”   Ben looked over at Tom who had a Cheshire cat grin on his face.

“He was the one who told us about how you both wanted to renovate your master bath but didn’t know what to do with it.  So he wanted to surprise you with a new bathroom,” Amy told him.  She brought in her team of workers and introduced them to Ben.  He shook their hands and was polite.  He couldn’t take his eyes off their new bathroom.  It was gorgeous, just like he and Tom had discussed.

Pete came in shortly after the reveal.  “Wow, you guys certainly made it a challenge to keep up with you. Where did you learn how to drive, Tom?  With Mario Andretti?”

“You were in on it too?”  Ben looked at Pete; he was Tom’s co-worker and their friend.

“You’re damn straight I was.  I was the spy; I kept contact with Amy and the restaurant and told them what was going on.   I was also the one who made your tire flat.”

“You did?”  Ben looked at him accusingly.

“Don’t get mad at him. We told him we needed a delay tactic in case you guys were going to head back too soon,”  Amy told Ben.

After everyone left, they tried out their new tub, together.