I'd like to welcome back author Kendall McKenna to my blog today. 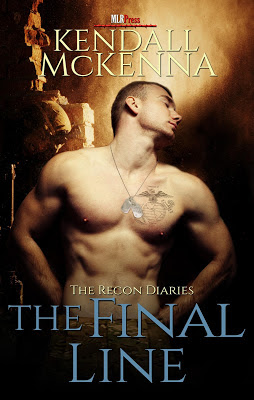 The Final Line is the third in the series, but it stands alone. If you’ve read Brothers In Arms and Fire For Effect, you’ll love seeing Jonah, Kellan, Chris and Mirai in supporting roles. If you chose to start with The Final Line, you won’t miss a thing, but you might find the desire to go back and read about everyone’s earlier adventures.

The Final Line is the story of Staff Sergeant Corey Yarwood. He appears in the previous books, but briefly enough that his history is covered in some quick dialog, so first time readers take the same journey with this story, as the veterans do. Corey is newly promoted and just about nine months post-deployment in Afghanistan. Something bad happened to him there. It’s left Corey with a bad case of Post Traumatic Stress and critical memory loss. The plot of the story revolves around uncovering what happened in Afghanistan, and who is covering it up. Someone else knows what went down and he’s a thorn in Corey’s side, driving our poor hero nuts in the B-plot. The heart of the story though, is Corey and Sean falling in love.

Some of you may know this, but men who serve in the military, and also in law enforcement, are a slightly different breed. What sets them apart is a combination of their inherent personalities, and the socialization/conditioning they obtain in their military or law enforcement sub-cultures. Nothing is cut and dry, and it’s not a cookie cutter formula. But there are patterns, and the end result is our emotionally reserved, action-oriented, compartmentalizing, men of very few words. That last one is very important when writing these types of characters. The other one that’s important is the emotional reserve. Don’t confuse that with repressed. And it certainly doesn’t mean these men don’t feel, and feel deeply. They just go about it and express it differently from the rest of us.

Most readers identify that I write about specific types people, and recognize most of the characteristics, even if they themselves have had limited, or no contact with military or law enforcement personnel. They may not relate to many of the character traits, but they get that the traits are consistent with the character(s) I’ve written.

Once in awhile, a reader surfaces who not only has no familiarity with these men, their friends and their families, but their minds are closed to the idea that people like this can even exist. Rather than asking themselves, ‘wow, is this really how a Marine thinks/feels/reacts?’, they say to themselves ‘this is stupid, no one behaves this way’.

Yeah. Yeah, they do.

Let’s look at Corey Yarwood, from The Final Line.  Corey has been a U.S. Marine nearly his entire adult life. He’s had his heart broken. He loves being a Marine. He wants to be a good man and a good Marine. He is suffering from a bad case of PTS. Rather than seek help, admit weakness, and talk to someone, he self-medicates with alcohol. This creates a new set of problems for him. He meets a great guy. It seems like they could have something good together. Corey can’t share his fears or his feelings with Sean. He hates Sean seeing him vulnerable. He would almost risk losing Sean, rather than tell the story of his broken heart.

Because Corey has been trained in the Marine Corps (unofficial) code that he must be strong at all times, he must solve his own problems, he cannot ask for help because it will make him be seen as weak, he hides his PTS symptoms and turns to alcohol as a sleep aid, and to repress his recurring nightmares. Would it be easier if he got counseling? Of course, but he can’t because…see above.

Sean is a kind, sympathetic and empathetic man. He understands that Corey is having issues and wants to help. He doesn’t see Corey as weak; quite the opposite. Corey has strong feelings for Sean, and they’re mutual. Much of what keeps their relationship from moving faster than it does, is Corey’s reluctance to talk. He isn’t easily able to talk to Sean about how he feels about him. He’s even less able to talk to Sean about the PTS, and how it affects their relationship. Would it be easier for Corey to tell Sean he cares deeply for him and his PTS is causing this thing they’re fighting about? Of course, but he can’t because…see above.

Corey doesn’t talk about his deployments, or about combat, if he can help it. He glosses over events when they come up in conversation. He downplays his contributions and changes the subject. Sean pushes Corey to explain things, to discuss things that bother him, to tell stories, and to share bits of himself. Corey sometimes evades, he sometimes flat out refuses. It’s not that Corey doesn’t want to share things with Sean, it’s not that he doesn’t care and doesn’t want to talk to Sean. Corey needs to compartmentalize. He sees ugly things. He does ugly things. He has ugly things done to him. He wants Sean to stay clean and shiny. Corey wants Sean to be his refuge from the ugliness. He wants something safe that he can turn, to escape the ugly.

This last one, more than any other, I feel is the most misunderstood thing about military and law enforcement men. They experience high, high percentages of divorce because their spouses tire of not being ‘let it’. It isn’t a lack of desire to share, it’s a need for a safe, clean refuge that is untouched by the ugliness of work.

I’m happy to say that Corey gets his act together. He realizes he has too many good things in his life to keep buying into the tough-guy rule of his sub-culture. It’s damn hard. He doesn’t wake up one day a chatter box, but he does learn to talk. A little.

some eyecandy (Kendall supplied.  Bring out the droolbuckets) 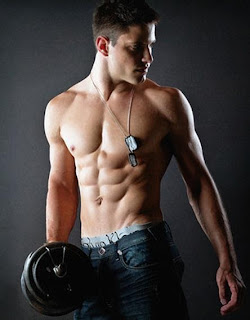 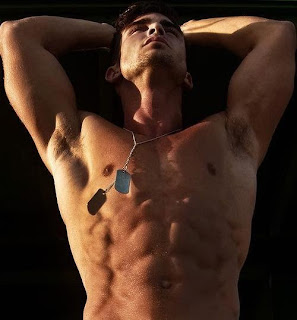 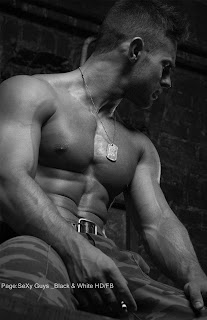 To find out anything more, you’ll have to read the book!

If you’d like to learn more about me, or about any/all of my books, including The Recon Diaries, you’ll find what you need at my website: www.kendallmckenna.com

a Rafflecopter giveaway
Posted by lily sawyer at Friday, July 12, 2013