This week's prompts are: "If you wish upon a star" and the alternate prompts are:  use pea soup in your story or have your character make some sort of comfort food or "When I'm away from you, I feel..." or use an overdue book fine at the library or  "My .... is bigger than your ..." or "round and round the mulberry bush" or "She slid her thumb gently across my lips and I thought I'd melt" or have your character Google something.

One of the things that Ben loved about their home, besides the gorgeous new master bath—‘thank you Tom’—was their home office.  It had everything Ben needed to do his real estate business.  He’d been working for one of the top real estate offices in the country until six months ago when he and another agent, his friend Mike, decided to open up their own office.  So they divided their time between the office and doing work from home.  Today, Ben was handling a short-sale negotiation with a bank, which could take forever and a day.

It was a relief when his cell phone rang.  “Hi Tom.” He’d read the caller ID before he answered.

“Hi Ben, am I interrupting anything?”  Ben was thrilled to hear his man’s voice; he felt his cock perk up too.

“Oh, well, lucky you.  I’m on my lunch break. It’s been a pretty quiet day at the station.”

Ben was looking for a file in the cabinet. Even with the modern age, he still dealt with paperwork.  “You better enjoy the lull while it lasts, hon. Hey, what would you like for dinner?”

“Well, how about defrosting those steaks in the freezer, and we can BBQ when I get home?”

“Sounds great.” Ben had found the file he needed, but he accidently hit the bookcase and some books fell on the floor.  “Shit!”

“What happened, Ben?”  Ben could hear Tom’s concerned voice on the other end of the line.

“I’ve got a library book that’s…” Ben paused to check out the due date.  “Holy cow! It’s over a month overdue. Damn, why didn’t I get any notices?”

Ben prided himself on taking his library books back before or by the due date. He was rarely late.   He checked his Gmail account.  “Ah ha.”

“What?”  Tom’s voice came through the phone, which had been set on speakerphone, while Ben busied himself looking at the computer.

“So? Just take it back and pay the fine.” You could almost hear the shoulder shrug Tom was giving him over the phone.

“It’s just that this breaks my perfect, or near perfect, record with the library.”

“Sweetheart, there’s no need to get upset.  Hey, while you’re there, why don’t you take out the book “Don’t Sweat the Small Stuff, and it’s All Small Stuff.”

“Yeah, yeah, whatever.” Ben knew he was making a big deal out of small potatoes.

“I’ll bring home something special for you.”

Ben took the steaks out of the freezer and put them in the fridge to defrost.  He took the book back to the library and paid the fine. While he was there, he looked at some new books.  He ended up taking four books out, including the book Tom suggested and “Who Moved My Cheese.”   He set up an alert on the calendar on the computer to make sure he would return these books on time.   Although he could already renew them on the computer if need be.  He was a slow reader so he might need to do that at some point.

When he got home, he smiled when he spotted Tom’s car in the driveway.  “Honey, I’m home,”  he yelled out the cliché line from I Love Lucy.

“Oh Ricky darling, I missed you.  Let me take your things.”  He took the recycle bag Ben took with him to carry the books in.

“Tom, cut that out.”   Ben laughed at Tom’s imitation of Lucy.

“Wahhhh, you don’t love me anymore.”  Tom wore a pout on his face.

Ben kissed that pout right off that handsome mug.

“I’m seasoning the steak up, and I put together that marinade you like.”

“You mean the one you’re famous for at the station, Tom?”

“Well, we still have about two hours before they’ll be ready to grill.”

“Aw.”  Now it was Ben’s turn to pout.  He felt Tom’s finger on his chin as his man tipped his head up so their eyes met.

“A surprise?”  Ben’s face lit up like a kid on Christmas morning.

“Go look in the fridge.”

Ben couldn’t get to the kitchen fast enough.  He opened up the fridge door and there on one of the shelves were two plastic containers filled with chocolate mousse.   “Tom, you know chocolate mousse is one of my weaknesses.”

“Dinner first.”   Tom closed the door on the yummy confections.  “Come help me shuck some corn.  I’m going to grill up some peppers and corn to go with the steaks.”  Ben helped his man make dinner.   “So, what are the other ones?”

“You said chocolate mousse is one of your weaknesses, I was wondering what the other one might be.”

“You.”  Ben smiled and Tom stopped cutting up peppers to wrap his man in a hug and kiss him.   Dinner was going to be a little late, as they moved to another kind of main course in the bedroom.

This is what Tom brought home for them for dessert 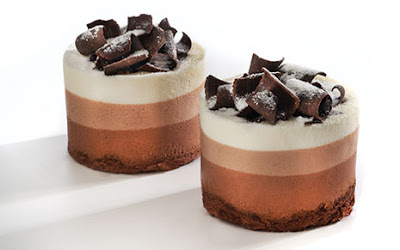